Jatco engineers used linear solenoids, which initially had a high cost, but it was possible to reduce the number of electric valves in the hydro block. In most cases, when performing major repairs of the JF017E variator, the valve body was opened, and the solenoids were completely cleaned, which allowed them to extend their service life significantly.

Replacement of electric valves is required only in cases where the driver disregarded the recommendations for the oil change interval.

The hydro block on this variator was quite resilient, and it was easily cleaned, which was carried out as part of the overhaul of the transmission. The transmission was removed from the car, the valve plate was opened and cleaned.

Problems of the JF017E transmission

This variator was clamped settings of the locking clutch, which slightly worsened the performance of the car’s dynamics, but at the same time extended the service life of the torque converter.

It was necessary to open and change consumables here no more than once in 100 thousand km mileage. For such a recovery planned repair, special kits were used, which made it somewhat easier to restore the variator.

Problems with the oil pump are typical for all CVT. Often on the JF017E variator, the pressure reducing valve hung up, which from long work on dirty oil wore out, requiring replacement. Also, problems with the valve were noted in cases when the variator had to work at a certain pressure during the active acceleration of the car. When the oil pump malfunctions, the system pressure dropped, belt slippage and premature wear of the cones were noted.

For such repairs, a special anodized aluminum valve with an increased landing diameter was usually used. If the car owner contacted the service in time, it was possible to eliminate such a failure at the initial stages, which precluded a complete replacement of the oil pump.

The need for scheduled repairs usually arose on a run of about 100 thousand km mileage. The gearbox was opened, all consumables and gaskets with bushings were changed. The torque converter was restored, in which the eaten locking clutch was changed. It was also recommended to perform an inspection of the steer motor and oil pump, if necessary, the oil cooling system was cleaned. It is not recommended to neglect the implementation of such planned repairs of the JF017E variator, since this eliminates critical faults and reduces the repair cost of the car.

If there are symptoms of problems with iron, namely power hang and transmission slippage, you need to perform major repairs, change the chain or belt depending on the modification of the variator, inspect the cones and clean the hydraulic unit with solenoids. It was also often necessary to replace the worn-out pressure reducing valve in the pump, which eliminated critical wear of the continuously variable transmission. In the presence of malfunctions or glitches in the electronics, the control unit was diagnosed and replaced with failed sensors.

How to extend the service life of gearbox JF017E

The new variator was quite reliable, having a resource of about 300 thousand kilometers. However, this continuously variable transmission was critical to the aggressive management style, it was also necessary to monitor the cleanliness of the oil, promptly contact the service at the first sign of a malfunction, and do not neglect the recommendations of the automaker in terms of planned rebuild JF017E variator. 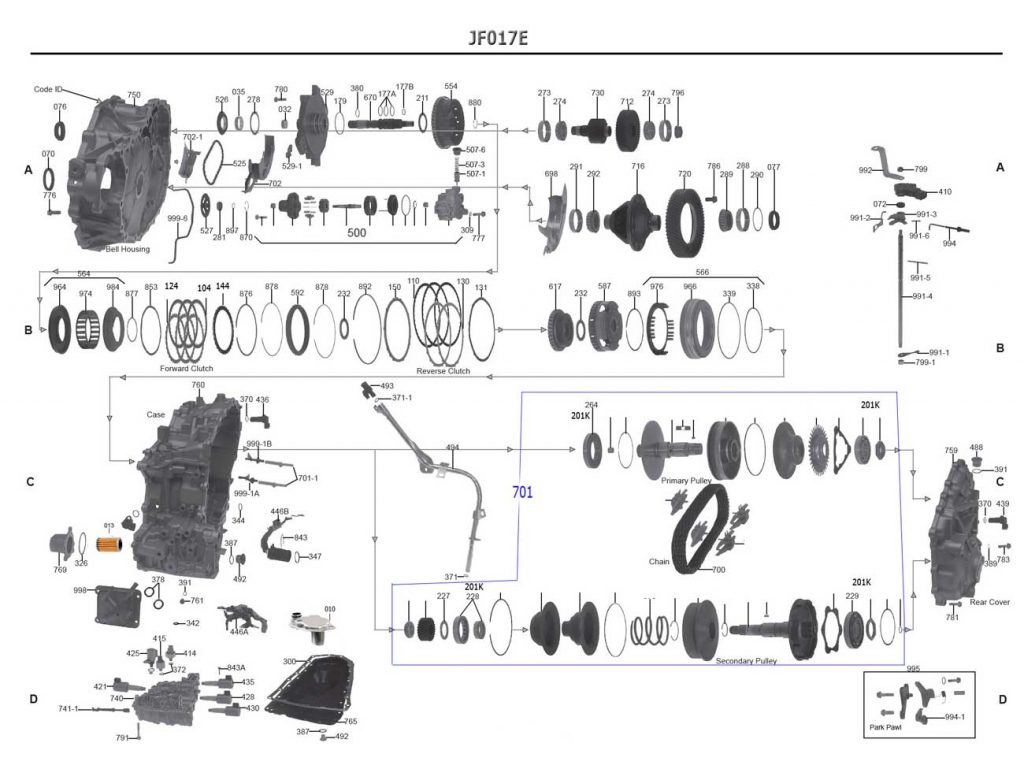