The car owner only needed to perform timely maintenance, which precluded any problems with this machine.

Typical failures of this transmission are standard for all automatic machines. This is, first of all, the torque converter, which was worn out from the aggressive style of driving the car, the hydro block, clogged with dirty ATP-liquid, as well as iron with a pump. The pump began to wear out, not giving out the necessary pressure in the system, which could lead to other critical failures along the chain, bumps when changing gears, and noticeable vibration, which only increased as the car was used.

After several years of operation, problems with the solenoids were eliminated, which were not too reliable and clogged from dirty oil on the first versions of the transmission. The second generation of electric valves was more successful, they could withstand 200,000 kilometers or more, and could be cleaned, which made it possible to repair 8L45E, 8L90E operation of the machine completely.

It was necessary to monitor the condition of the torque converter, the consumables in which could quickly clog the oil during wear, which led to serious transmission failures.

Video (DIY) How to change oil

The new family of 8-speed automatic transmissions included two transmissions. The 8L45E was intended for less powerful cars with engines up to 3.6 liters. They also designed a reinforced version of the machine 8L90E, which was installed even on 8-cylinder engines with a working volume of 6 liters. This transmission was developed specifically for use on premium cars, it was reliable, fully controlled by electronics, providing the most comfortable control of the car.

When developing this machine, American specialists from General Motors took the popular German 8-mortar from ZF 8HP as a basis. Both of these boxes have many similar functions, including a Start-Stop system, which improves the performance of cars.

Unlike its American competitor, the American transmission had a greater margin of safety in the iron part, so it could go 300,000 kilometers before the first overhaul of the automatic transmission 8L45E, 8L90E. This box, like all modern automatic machines, was critical to the quality of the oil, which had to be changed on a regular basis.

Eight-speed transmission 8L45E and 8L90E are rarely repaired, due to the relative freshness of such transmission and a small mileage of cars. Most often, it was necessary to restore the torque converter or replace leaky gaskets. As a preventive measure, all the bushings were changed, and as for the cars where car owners ignored recommendations for oil replacement, the hydraulic block was also opened, and the valve plate was cleaned.

Also, the problems were caused by the oil pump, in which the valve was worn off, after which it was cleaned, the automatic machine in the conditions of such oil starvation quickly wore out, which led to critical malfunctions. It was necessary to use only original spare parts to rebuild 8L45E, 8L90E, which allowed restoring the transmission, eliminating even critical breakdowns. 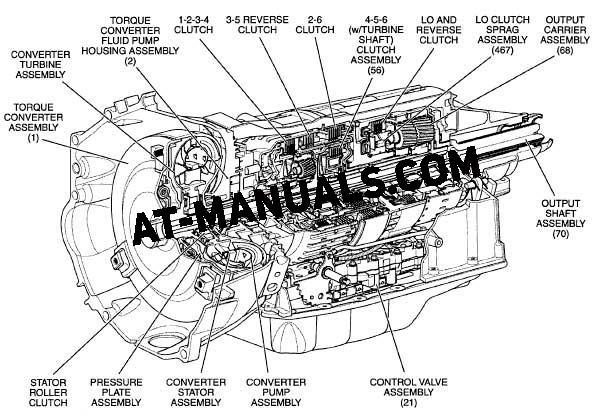